Because my longest individually-authored publication to date, A Blinded Mind, not only has a release date (November 2nd) and a url where you can find it (A Blinded Mind with Dreamspinner Press), it also has a blurb and, more importantly, cover art!  It's like being given the gift I most longed for two months early.  I've been on pins and needles waiting to see this cover art and I love it! 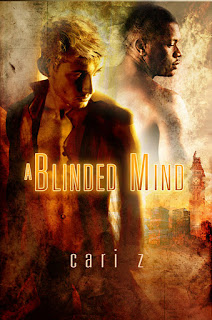 I mean, yum, right?  Captures the dystopian feel of the subject matter (the story occurs post-WW3) while being totally hot.  Thank you, Anne Cain, for being awesome, and thank you Dreamspinner Press for letting me pick her and not just saying, "You take what you get, suck it!"

Not that that's ever happened to me, exactly.

Anyway, how about we round this post out with a blurb?  I'll put a snippet up later this week to give you a feel for things.

PS--I wrote this story in Togo during the dryest, dustiest season of the year, and some of that bleakness comes through in the writing, but you all know I love romance and happy endings and I would never torture you.   Not unless you asked for it :)

Jonathan Hatcher has led an interesting life. Once the psychic protégé of Dr. Nelson Cagney of the Bureau of Psychological Corrections, he escaped and went on the run through post-World War Three Europe, scraping a living out of the ruins of civilization and avoiding the mindless vics: humans turned berserker by exposure to biological and chemical weapons.


Once again at Cagney's mercy, Jonathan is stuck in PsyCo's high-security wing with no idea whether Sam, the man he thinks he may love, is alive or dead by his hand. Though at first he only plays along for news of Sam, soon Jonathan sees the conditions in the warring European Coalition are desperate. Sam and Jonathan must make a choice: make for France and a life together… or team up with their captors against a devastating new threat.
Posted by Cari Z at 8:38 AM