Notes: Hey darlins! More Rivalries today, and just an FYI...I commissioned art for the story I'm going to be posting to my Patreon, and it' GORGEOUS! I can't wait to share it there, and eventually elsewhere too once the story is done. It's a dark fantasy tale, and if you're following along, I guarantee you won't be disappointed. 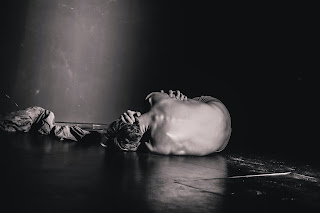 “So,” Johnny began as he drove them toward Charlie’s place that evening. “I hear you just about gave Principal Cross a heart attack in your senior class today.”

“I took her to church, more like.” And he didn’t regret a damn minute of it, either. “I don’t understand where she gets this intense need to look down on the Stheno kids, but—no, it’s not even just that she’s looking down on them, she’s actively trying to sabotage them, and I don’t get it. I just…” He shook his head. “They’re kids. They’re not her school’s kids, but they’re kids with knacks, exactly like the ones she takes care of every day. I don’t understand why she’s so hard on them.”

“It’s the subject of a lot of watercooler conversations,” Johnny said, his thin face contemplative. “I’ve only been working for the district for five years, so I’ve never known her to be any other way, but some of the older teachers remember the ‘back in the day’ times when she apparently wasn’t so much of a bitch.”

“And what’s their theory?”

“Oh, there are several. One revolves around a teacher she may or may not have had an affair with who eventually got canned from Euryale and worked at Stheno for a year after that. Another one centers around the fact that she doesn’t have a knack herself, and so while she’s got to help out the Euryale kids because she’s paid a lot of money to do so, she’s got no such encouragement when it comes to the rest of us.”

“No knack, really?” Charlie was surprised. He’d figured her knack was something small, not particularly flashy or useful, but not nonexistent. “Nothing at all?”

Johnny shook his head. “Nope. The other big theory has to do with her son’s death, but apart from it being tragic we’re not really sure what to make of it.”

“She had a son with a knack,” Johnny replied. “He was a few years ahead of us in school, at Euryale of course. I think he went into the army.” He shook his head. “He died a year after enlistment, it was in the news. Some kind of friendly fire thing. Tragic, but not really a reason for her to hate kids with knacks, you know? And she can obviously tolerate them well enough to be the principal of a school full of them, so…”

“Yeah.” Charlie sighed, then did his best to let it go. Lots of them had died over the years. Kids with knacks, more than anyone else, were pushed to the limits of human endurance in the name of science, of glory, of patriotism. He was a little surprised there were any people with knacks left, the way their numbers kept getting whittled down over the generations. Then again, most parents whose kids were born with knacks had none themselves. “You ever wonder why knacks exist?”

“Like, religion-wise? Or evolution-wise?” Johnny turned into Charlie’s apartment complex and parked the car. “Because neither of those answers is simple.”

“Just…eh, don’t listen to me.” Charlie got out and wrangled his briefcase out with him. He put it on top of the car and went for his coffee mug next, but Johnny already had it in hand. “You don’t have to carry that for me.”

Charlie rolled his eyes, turning around so Johnny couldn’t see his smile as he headed for the entrance. “Since when have you been such a sweet talker?”

“Since I figured it might help me get laid,” Johnny replied, batting his eyelashes shamelessly. “Is it working?”

“Yes.” Charlie laughed when Johnny blushed—he could dish it out when it came to flirting, but being blatantly appreciated wasn’t quite comfortable for him yet.

“Seriously, though,” Johnny said as they got out of the elevator on Charlie’s floor. “Why did you ask about the knacks? Just because a question is complicated doesn’t mean I don’t want to talk about it.”

“Oh.” Well, that was kind of a surprise. In retrospect it shouldn’t have been—Johnny hadn’t given any indication that he was only in this for the physical stuff, and he was actually a good resource when it came to knacks. He’d probably seen a lot more of them than Charlie had since he started working with the military researchers. “I was actually wondering why knacks like Ari’s came about.”

“The kid with the dependency issues,” Johnny said thoughtfully. “Yeah, that’s a good question. I assume that something went wrong with the expression of it, to make it turn on him so hard, but maybe it didn’t? What could be the reason for binding yourself to another person so strongly?”

“I don’t even know,” Charlie replied. He couldn’t quite keep the frustration out of his voice—he’d thought about this a lot. “Or, like, a physical knack that weakens you instead of strengthening you. Or a mental knack that makes you see things instead of other people.” Those were all things he’d run into over the years, and they’d given the people who manifested them hell. “They just don’t make sense.”

“A lot of traits in humanity don’t make sense,” Johnny agreed. “It’s evolution’s way of hedging its bets. Like how sickle cell trait gives you resistance to malaria, but sickle cell anemia can be deadly. Same with these knacks. Something goes wrong in the expression of them, and…” He shrugged.

“Not that we know of, yet,” Johnny clarified. “Unless you’re religious, in which case…”

“Yeah. Not helpful.” Knacks had led plenty of unqualified people into positions of authority, and they’d also doomed a lot of otherwise normal people to hideous deaths at the hands of angry mobs. It varied from time to time and society to society, but when it came to knacks, the only thing that was certain was the uncertainty of them.

“I’ll keep looking into helping Ari,” Johnny said into the momentary silence. “In fact, I’ll do some of that tonight…if you don’t mind sharing your space for another evening.”

Did he mind not having to face his nightmares by himself for another night? “That would be great,” Charlie said. “Thanks.”

Charlie’s alarm began to go off—five minutes to Ari time. “I’ve got to…”

“Yeah, go,” Johnny said, already pulling out his laptop. “I’ll work in here, and maybe start some dinner too, if you don’t mind.”

Charlie didn’t mind in the slightest. “Anything you want.”

Johnny winked. “I’ll hold you to that.”