The Tank: Chapter Seven, Part One

Notes: We're about to lift-off! It'll be a short but very bumpy trip to Paris, so hold on tight ;) 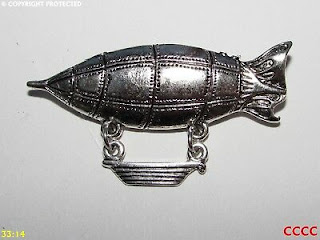 “Oh my goodness,” Caroline exclaimed under her breath as she caught sight of the silver dirigible flying their way, already canting itself down for a landing. “How can such a thing be possible?”

It was a good question, and one Anton would have given a limb to have answered. Airships in and of themselves were nothing new—hot air balloons had been introduced to the skies almost a century ago, first as little more than curiosities, gradually becoming something that could be used for surveying, emergency transport, or in the case of nearly every government on the continent, a weapon of war. They were too slow to be truly effective as more than a lookout, though, and too vulnerable to puncture. Modern airships were faster, better armored and light enough that they had a bit more utility, but they were still better in theory than practice. At least, that had been the case, before Anton had cast his eyes on this.

The airship descended until it was within twenty feet of the ground, then threw out a line. A young man—probably still a lad, given his slightness—shimmied down it effortlessly, took something out of his pocket and stuck it through the loop on the end of the line, then jammed that into the ground. The connection point glowed white for a moment.

“We’re stuck tight!” the boy shouted up toward the cabin of the airship—which was another point of amazement to Anton. The entire device was miraculously quiet. Where was the flame? Did it run on electricity in some way? Even if the French had somehow perfected the art of lightning capture and storage, there would still be a hum about the entire business. But it was almost silent.

“Good work!” a voice called in reply. The ship sank the rest of the way to the ground, coming to rest exactly on top of the anchor holding it into place. It should have wobbled—there was no real basket, no struts to catch it, just a smooth, curving ship-like belly—but instead it stuck like a tongue in a groove. As soon as it was settled, a handsome, dark-haired man in an Imperial army uniform, with a silver airship medal on his chest, lowered a walkway and stepped briskly over to them. He saluted Camille.

“We came up as swift as we could, milord.”

“Excellent, Captain, thank you for your diligence,” Camille said, sounding every bit as haughty as Anton knew he could be, and yet…there was something warm lurking beneath the surface of his voice. “I hope I didn’t send you and your shipmate too far out of your way.”

The man smiled. “Not at all, milord. Nowhere’s out of the way for our beauty, ‘specially not for you.” He glanced over Camille’s shoulder and winced sympathetically. “Should we load your cargo, then? People should wait for the last moment, I reckon—it won’t be a comfortable ride, not at this time of night.”

“That would be acceptable.” Camille waited for the captain and the lad who evidently worked with him on the airship to begin grabbing the luggage Anton had so painstakingly assembled before he turned back to the party. “Sirs and lady,” he said formally. “The rest of our trip to Paris will be facilitated by the latest in Imperial airship design, the Fleur D’Argent. We should be there before midnight tonight.”

“What’s the catch?” Dr. Grable asked with a grunt, silencing the amazement of their fellows with his stern tones. “If it was that easy, nobles would be demanding rides all over the continent, not subjecting themselves to trains.”

“Indeed,” Camille agreed. “This ship is one of only three of its kind, a proof-of-concept prototype created by the Institute. One of the side-effects of its use is the fact that, to be most effective, it must be used in a lighter atmosphere. This means that it goes very high, and the ship itself becomes quite cold.”

“Warming spells can take care of that.”

Camille shook his head. “Not in this case. The…” He cast a glance in Caroline’s direction, and folded his hands behind his back. “The thaumaturgical equivalencies at work are, from what I understand, quite delicate. The device which powers the ship is quite fragile, and a random spell at the wrong time could cause fluctuations in its magical matrix.”

Dr. Grable shook his head. “Not ideal for a weapon.”

“No,” Camille agreed. “But it still could be an effective transport, once the other issues are worked out.”

“Turbulence. Occasionally monumental turbulence. You shall all have to be strapped in rather tight. Even you, sir,” he added with a regretful look at Dr. Grable’s leg.

“Dignity goes before death, I s’pose.” Dr. Grable sighed, then held out an arm to Anton. “Come on, then, help me up and in there.”

Anton went to him at once, pleased to have a task that would take him out from under Camille’s gaze. He resolutely didn’t check in on Caroline, just gritted his teeth as Dr. Grable leaned his considerable weight onto Anton’s shoulder as he stood. “Bloody God-damn hell,” the older man gritted out through clenched teeth. He kept his leg—splinted now—airborne, and making it up the ramp was a painfully slow process.

“This way, sirs!” the lad called out, appearing beside them once they reached the top of the ramp like a Jack-In-The-Box. He led them over the smooth wooden flooring to a little passenger’s berth, one set of stairs down from the captain’s station. “There’s room for six,” the boy pointed out, rather proud. “Good thing you lost a few, eh? The bodies’ll go in the hold below. They’ll be right safe there,” he added, crossing himself for good measure. “Promise.”

“Thank you,” Anton said. There was something about this boy… “Can you show me how to work the harness?”

The contraption designed to hold them in place was labyrinthine in design, built to withstand forces coming at you from all directions. Once Dr. Grable was strapped in tight, the boy began adding blankets and padding. “You’re close to the engine down here, so it gets even colder than it do outside,” he said apologetically.

What sort of engine gets cold when it’s working, instead of hot? Admittedly, Anton was no sort of engineer, but from the little he knew of the contraptions, that seemed counter-intuitive to him. He’d have to see if he could glean anything once they touched down in Paris and circumstances were less urgent.

“Let me give you a hand, sir,” the boy said, leaning in to help Anton adjust the straps around his torso. As he buckled Anton’s shoulder in, he said, “Don’t remember me then, sir?”

“Remember you…oh!” Oh, of course! It was the boy from the train, Bert, whose father had been killed in the Devoué plot and who had helped save the day in the end. “My word, Bert, you’ve grown so much I hardly recognized you! How on earth did you come into this position?”

Bert leaned back a bit, pleased. “Lord Lumière got me into the corps as a powder monkey,” he murmured. “He said he’d find a place for me, an’ he did. Boats was fine and all, but when a chance to fly in one of these came along, I wanted it. He came to visit, I told him, and—poof!” He snapped his fingers. “Look at me now!”

The young man blushed. “Thanks. If I had to lose my dad, at least I got this out of it, right? A word for you, sir, for your kindness.” He leaned in. “It’ll hurt, but keep your eyes open a little it you can during the flight. Sometimes residue from the Nothing seeps out, and it’s right beautiful.” He was upright before Anton could ask for clarification, clapping a wool-lined leather cap down onto his head. “Tie it tight over your ears, sir,” he said with a grin. “And don’t forget the top flap to cover your face.” He bounded away, leaving Anton to stare after him, wondering what the hell kind of residue nothing could leave behind.
Posted by Cari Z at 11:55 AM