Noes: Our last chapter of meandering conversation before we get down to the hunt! It's cute, though. What, parasitic organisms can be cute. 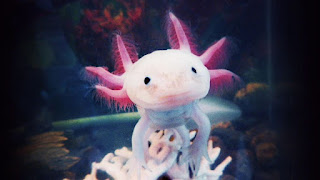 Cas didn’t expect to be joined in bed that night. He’d figured he’d be alone there for the rest of however much time he had left with Rone, actually—or he’d be alone in a different bed, a smaller bed, meant for a solitary person who hadn’t lied their way into a marriage. He got under the covers alone, he lay on his side and stared at the wall alone, and finally, he fell asleep alone.

He woke up with a hot body plastered to his back. The heat was almost enough to make him sweat, but that wasn’t the part that woke him—it was the way the phage was purring against his skin, practically vibrating the tiny hairs on his back with the sheer pleasure of being curled against Rone.

“What the fuck?” Cas muttered. He had never, ever heard of a phage acting like this before. Everyone who survived getting a phage implanted did so because they had been strong enough to beat the parasite into submission. From then on out, that was the dynamic—obedience was earned, and it was earned by practice and stricture and slowly doled-out care. Phages…hell, they weren’t pets. They didn’t have the brainpower to be a pet. They were organisms to be trained, tools to be used.

Then why was his phage acting like a snugglelump salamander that wanted nothing more than to cuddle with Rone?

“You feel strange,” Rone said sleepily. He had one arm around Cas’s waist—not tight, but firm enough that it wasn’t just something Cas could slide out from under. “Kind of crawly.”

“It’s the phage,” Cas replied. He felt a little at a loss for words. “Why are you…I mean, it’s totally fine with me, but I didn’t think you’d want to…sleep in here. With me.”

Rone sighed. “I wasn’t sure I’d want to either, but honestly? Unless it makes you uncomfortable, I’d rather keep things the way they were. If you or I go to another room, someone—probably one of the kids, but possibly one of my subordinates, and I don’t know which would be worse—would find out about it. Then it would get around, and the next thing you know people would think we were fighting or on the outs or seconds away from a messy divorce, and it would be really damn messy considering my status here.”

“Oh.” Cas hadn’t even considered that Lilah and Shar might think it was strange. No matter how open and honest things were between him and Rone now, there was still work to be done, still a cover to maintain. He had to continue to be Beren for the time being, at home and abroad. “You’re right. When are the kids coming back?”

“They’re not. We’re picking them up, and spending some time with my brother while we’re at it.”

Great. And it was, but… “Am I going to survive going through those damn doors?”

“I tested them,” Rone said quietly. “You’ll be fine. I wouldn’t let a little thing like a security door take you out now. When we’re done with this, though? I’m going to do everything I can to make them capable of detecting the phage. This is a security flaw that can’t stand.”

“It’s one you could have seen coming decades ago if you’d bothered to do the tiniest bit of diplomacy with us instead of pretending we didn’t exist so you could make deals with the Leelingers.”

Oh hell. Why had that come out right now? Cas didn’t need to start a fight right now, ugh. He opened his mouth to apologize.

“You’re right.” Rone sighed gustily across the back of Cas’s neck. “My father thought—believed, with all he was—that military power needed to be the focus of our policies. He was Imperia first, Imperia all the way. There was no point in reaching out to anyone other than the established governments of any other world, because the minorities didn’t have enough power to be consequential. No one else did, really. Imperia still has the biggest ships, the biggest guns, the most powerful biological weapons. Or so we thought,” he added in a wry tone. “I’m grateful that you’ve shown me otherwise.”

Guilt knotted uncomfortably in Cas’s gut. “You don’t have to say that.”

“I wouldn’t say it if I didn’t mean it.” Rone gave him a little squeeze, then sat up. Cas rolled over to look at him. He wad dressed in thin, temperature-controlled sleep clothes that clung to his body, unlike Cas, who’d rolled into bed in a pair of shorts and nothing else. Instead of getting up and treating Cas to a view of him from behind, though, Rone just sat there and stared at him.

“What is it?” Cas asked after a moment.

“I’m just still trying to wrap my head around the fact that I’m sleeping with another man.”

“Maybe,” Rone allowed, “but you look different. Not just that, but you act different, you hold yourself differently.”

Cas shrugged. “I’m me right now. I don’t get to be me often, so I try to commit to it when I do.” Knowing it was weird but unable to stop himself, he asked, “Do you want to watch me change?”

Rone seemed surprised but not put-off, if the way he’d tilted his head was any indication. “You really wouldn’t mind?”

Part of Cas did mind, actually—he hadn’t let someone actively watch his change, knowing what they were watching, since training. He’d kept it out of Beren’s life, which had been fine by his little brother—Beren hadn’t liked it, said it was creepy. But a bigger part of Cas wanted Rone to know exactly what he was, and what he could do. “No, it’s fine.”

“Do you need to prepare for it somehow, or can you just—” He waved uncertainly at Cas’s face.

“I need to burn a mildew-scented incense cone and dip my fingers in the blood of a frog,” Cas said solemnly. Rone stared, and Cas’s smile broke through his straight face. “No, there’s nothing to prepare. It’s just getting up the willpower to actually do it. The phage tends to be a little reluctant to move after a big workout like last night.” Although today, the phage actually seemed unusually perky. Cas lost focus with his eyes as he turned his attention inward, ready to exert the necessary pressure for—

The phage surged to his face and changed its structure so fast that his skin stung. “Ow,” he muttered, rubbing the new bridge of his nose. He glanced up at Rone, who seemed a little shocked. “It’s not usually that fast,” he said.

“That was—definitely fast,” Rone agreed after a moment of silent staring. “And now you’re…back to Beren.”

“Sure.” Yes, please touch me. And he did, trailing his fingers lightly over Cas’s forehead, his nose, the new height of his cheekbones and the fresh smoothness of his chin and jaw. Cas held still for it, barely breathing, reminding himself not to lean in. He still looked, though, looked at the wonder in his husband’s expression, wonder that seemed to tilt on its side a few moments in and become—

All of a sudden Rone’s hand was gone, and he was standing, face shuttered and calm. “I’ll meet you in the kitchen in ten minutes.” Then he was gone, not even bothering to stop in the suite’s bathroom first. Cas stared after him and wondered what had gone wrong.