Well yay, more covers for me!  Reclaimed is the third novella in the Treasured series and it's going to be released on May 17th.  Then in August, all three of them will be packaged together and released as one.  I don't have a title for the anthology yet, and it is stumping me hard.  Feel free to offer up suggestions, I will reward you handsomely if I use it.  And by handsomely, I mean with fiction, 'cause that's what I gots, yo. 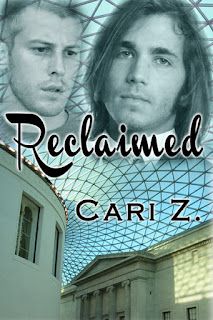 My boys and the British Museum, sweet!  The British Museum is kind of a secondary setting for the story, but it's still significant.  How so?  Let me give you a story snippet that helps paint a picture.


I fell asleep sometime around dawn. I had been up all night researching and printing out articles, and after a few hours my table was just as messy as it had been when I was in the throes of my dissertation defense. When I woke up, my head wasn’t pillowed on reams of paper, though, it was cushioned on the pillow from my bed. I was laid out on the sofa in the most comfortable way possible, which still wasn’t great, but was better than bent over my ancient laptop. The quilt my mother had made for me before I went to college was draped over me, and the air smelled like fresh coffee and bagels. Someone was holding my feet and rubbing a thumb gently along the curve of my ankle. For a second, I felt nothing but utter contentment. Then reality poured back in, and that light feeling turned to lead in my chest.


“Reese.” I opened my eyes and looked over at him. He was wearing the shell I loved the best, long and lean and gorgeous. He gave me a half-smile and saluted me with his cup of coffee.


“Looks like you didn’t follow my advice, Danny.” He glanced at the mess of papers. “I thought you were going to rest up, get plenty of liquids, so on and so forth. Instead you’re neck-deep in research.”


“It was important,” I mumbled, pulling my feet away and sitting. Reese frowned but let me go.


I ran a hand through my messy hair and sighed heavily. I could feel Reese shift a little, like he wanted to come closer to me, but something was holding him back. Reese had always been very intuitive, and he could read me like a book.


I shuffled through the papers on the table until I found the one I was looking for. I looked at it one last time, then handed it over to Reese. He took it silently. “Did you do this?”


Reese took a moment to read the first few lines, his lips slightly pursed, like he was considering biting into a lemon. “Old news, Danny.” He put the paper down on the arm of the couch and crossed his legs. “Lisbon was three years ago. Long before I ever met you.”


“I know that,” I said, pretty calmly I thought. “So were these ones.” I passed him the first pages of articles detailing thefts at major museums in Barcelona, Kyoto, Rio de Janiero, Rome. Each one was a high-profile theft going after magical artifacts, and all of them were jobs that had to be done by more than one person. National treasures had been targeted, everything from paintings to jewelry to statuary, each one sure to fetch the highest price on the black market. Reese glanced at the pages and then set them aside as well.


“So they were,” he agreed. He stared at me, totally expressionless. “What’s your point, Danny boy?”


“What about this one?” My hand trembled a little as I passed the articles I’d downloaded on the British Museum theft over to him. I watched him look them over, his face still a perfect blank. “I figure it had to be done with some kind of sympathetic magic,” I said. I’d gone over and over how Reese and his team could have pulled this off in my mind, and that was the only thing that made sense. “Five statues stolen, so five people mobilizing them, one for one. People skilled enough to get their hands on the statues at some point, to leave a piece of themselves behind and create a connection. People detailed enough to set up a perfect replica of each of the statues’ environments and genius enough to design the spells that would connect living, breathing humans to millennia-old marble.


“It’s so brilliant,” I sighed, closing my eyes for a second. “And it would take a lot of money to set up. Money and brilliance are two things that you and your crew have in spades.”


“All conjecture, pet. You don’t have proof of that.”


It wasn’t as though I didn’t expect it, but it still hurt to have it confirmed when he nodded his head. “Yeah,” he said after a second. “Yeah, we managed it. Not quite like you envisioned, but close enough. And it’s not the first job I’ve taken since you and I got together and you know it. So why the hell have you suddenly started caring about my work, Danny? It didn’t bother you a month ago when the money I make paid our way to Vegas for the weekend, it didn’t bother you three months ago when I sent your mother a baker’s dozen of roses for Valentine’s Day, it didn’t even bother you when you were run into the goddamn canals of Venice when some of my old mates came after me. Why now?”

And that's all I can share for now.  *sigh*  I'll have more info and links and all that stuff up on my website soon.  I hope you enjoyed the snippet, and if you want a sexier one, my post from 3/13/12 has the beginning of the story.