Notes: A longer chapter, with a little more exposition for you. We'll get back to action soon, but in the meantime--have some worldbuilding! 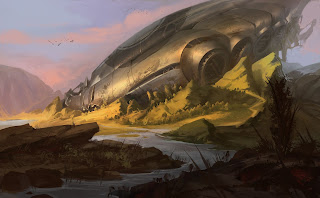 “We didn’t originally intend to be a monarchy,” Fillie said as she chauffeured Cas through the mess hall. He split his attention between listening carefully and keeping track of the people around them, soldiers who tried but generally failed to keep their interest in him discreet. Word had gotten around of Captain Basinti’s hasty marriage, and it looked like everyone was intrigued. “But the continent that our navigation system put the generation ship down on had just experienced massive volcanic activity. The ship wouldn’t fly, people were dying—it was a lot like what your people must have felt like on Delacoeur, probably.”

“Sounds terrible,” Cas said neutrally as the server gently placed a portion of casserole down on his plate—no splat for him, nothing that might stain the captain’s husband’s clothing.

“Right, so, John Basinti—our first king, but he wasn’t then, he was an engineer—figured out a way to turn the generation ship into an actual ship and sail us to a more hospitable continent. And it worked, and in the end we only lost ten percent of our original population instead of all of it, but things were still iffy—the weather was strange, the ship had to be reconverted in order to get into the sky again, we needed to find a new source of fuel—you know. Bad stuff.” She led him over to a corner table, which had been quickly vacated by two other soldiers when they saw them approach.

Fillie looked a little disappointed. “Aw, they didn’t have to go. You should meet more of your new people.”

Cas was just as glad they’d left. Apparently rank and mystery had their privileges. “You were saying, about the bad stuff…”

“The bad stuff, right! So, it was taking a long time to make these fixes, and the original colonizers were starting to die, and the only way some of their expertise had been passed along was apprentice-style, from one parent to the next. John Basinti had taught his children how to read the ship schematics, and after he passed away they kind of kept that knowledge to themselves, and eventually they were the only ones who could fix it, not to mention building new ships. So, they offered their knowledge for other kinds of assistance.”

Cas had to work to keep his jaw from dropping. “Wait, they blackmailed an entire colony into giving them kingship?”

“Oh no!” Fillie assured him. “Everyone wanted to make John’s son Koffi king! Our society was pretty messed up, and he was the only one with the authority to get people back in line.” She shrugged. “So we made him the king, and he did a great job. We got our police force back, he put the farmers to work—he even began our military!”

Of course he did. “And the Basintis have been running the place ever since?”

“So how does Rone fit into this narrative?”

Fillie frowned thoughtfully as she chewed a bite of creamed squash. “Well, he’s kind of a special case for the crown, because he’s illegitimate.”

Cas blinked. “And everyone knows that?”

“Oh, his father was very open about it,” Fillie assured him. “There are plenty of Basintis, but Rone was born along the direct line, straight down from John himself. His father was King Reginald, and Reginald’s first wife couldn’t seem to conceive—something about a virus she contracted, we’ve had some wicked ones on Imperia. The doctors were working on it, but Reginald wasn’t getting any younger, so he very openly had a child with another woman.”

“Oh, no one knows that,” Fillie said. “The important thing is that he had a son, not the identity of the mother.”

Okay, that was going too far. “I would think that it would be important to Rone to know who his mother is,” Cas almost snapped. So many Delacoeurian children had grown up without mothers, fathers—without parents at all. It was hideous to think of denying a child that experience on purpose.

Fillie blushed. “Oh, but…he probably knows, right? I mean, it’s his mother, I’m sure he knows, but none of the rest of us were allowed to. Because it didn’t matter, for the succession. Captain Basinti needed to be firmly associated with the royal family, and he was! The people accepted him, King Reginald was pleased, everything looked good. And then…”

“Queen Winifred got pregnant,” Fillie said in a rush. “They ended up having to go old school to adapt to her body’s difficulties, I think it was a womb transplant—at any rate, she had a son. Rone was five years old at the time.”

Cas could see where this was headed. “And the new son was named the heir.”

“Well, yeah, because he was really legitimate, you know? So Rone was trained to lead the military instead—that’s one of the hereditary roles for House Basinti.”

The easier to keep everyone else in their place. “And how did that go for him?”

“Well…okay, for a while.” Fillie winced and lowered her voice. “I hate to speak ill of King Amiru, but I think he was jealous of Rone. I don’t know why—he gets to be the king, after all—but he took over as supreme commander and put Rone in charge of Special Operations. They handle the really difficult tasks.”

“How did that work out for Rone?”

“He was amazing at it!” Fillie gushed. “Insurrections, mining disputes, contract issues with other planets—you name it, he handled it. We got to study some of his tactics back at the academy, and it was a real learning experience. He’s so smart. And then…” Her voice trailed off.

Oh no, she couldn’t leave it there. “Then what?”

“Well, no one really knows. He and his elite team were sent on a classified mission, but Rone was the only soldier who came back. The rest of his ship was filled with civilians, but their identities are all classified too. Except for the ones he adopted, we’re not sure what happened to the rest of them.”

Now this was interesting. “Adopted? His children are adopted?”

The plot thickened. “How many people were on his original team?”

“Just ten soldiers, but!” She held up a hand. “These were the best of the best! Our most highly-trained operatives, the military’s most advanced team of soldiers. And Rone wouldn’t say what happened, not even under interrogation protocols!”

“How does everyone know about this?” It sounded like an operational security nightmare.

Fillie shook her head. “Oh, the captain didn’t try to hide it. He came back to Imperia ready to fight—he crashed a meeting of the parliament! They didn’t let him speak, of course. Anyway, he was court-martialed and eventually found innocent of wrongdoing, but he didn’t get back into the field for a few years. Now he’s working with us, instead of with the combat troops. And we’re…” She made a moue with her mouth. “We’re good at what we do, but we’re logistics. We’re support staff for the rest of the military, basically. It’s not as honorable as he deserves.”

Cas didn’t really have much of an idea what Rone deserved at this point. He was more confused now, not less. Cas had seen his fair share of dark operations—hell, he’d carried out plenty of them. He knew what went into that sort of work. You didn’t emerge unscathed. But Rone didn’t have the hardness that Cas associated with dark ops. It was…a puzzle. “So he’s somewhat disgraced, but even a disgraced, illegitimate prince gets a lot of respect?”

“So much respect,” Fillie affirmed. “Our aristocracy heads every aspect of Imperian society. You have to be a lord or lady to hold a position of real power.”

“How do people become lords or ladies?”

Fillie laughed. “They inherit the titles, of course! From the originals who passed them down! Mostly they were scientists, although every so often a new title is named when someone from the lower rungs does something really exceptional. But for the most part, we obey the aristocracy, and they lead us with the insight and compassion that their bloodline entails.”

Sure they do. Cas finished what was on his tray, ignoring the sour taste Fillie’s information let in the back of his mouth. As much as he loathed the Leelangers—and he did with every fiber of his being—at least they felt their superiority was for all of them, and not just some. This aspect of Imperia would take a lot more research to get a handle on, he could already tell. “Are there ranks within the aristocracy?”

“Sure! Generally speaking, the ranks are split into two tracks: Lords of Metal and Lords of Mind. Metals are the people who inherited positions of practical skill, while the Minds are more focused on research and development. There’s a lot of cross-pollination, though. There are Grands, which are the highest rank an aristocrat can have when they’re not king or queen, then Eminents, then Primes. There are a lot of little in-between ranks too, but those are the big ones.”

“Metal, Mind, Grand, Eminent, and Prime.” That was awkward as hell. “So how do you speak to someone who’s an aristocrat, then?”

Fillie smiled. “In the captain’s case, we were instructed by the king himself to treat him as a captain only. We do our best, but we all know he’s royal and it bleeds into things. For other people, it would be…oh, like ‘Grand Lady Nyla Kinzel of Mind.’ Or ‘Eminent Lord Waylan Booker of Metal.’ There are a lot of other little niceties, but those are the basics.”

These people probably wasted weeks of their lives just learning how to address each other properly. “Thanks for explaining that. It’s very helpful.”

“I’m glad you think so!” She glanced at his empty plate. “Ready to kiss this planet goodbye?”

You have no idea. “Very ready.”

Fillie pushed back her chair and stood. “Then let’s go on board your new home for the next…however long until we get back to Imperia!”

Cas followed her out, his skin prickling with awareness. More eyes. More whispers.

Bring them on. Apparently, he was disgraced royalty now too.
Posted by Cari Z at 6:21 AM