Notes: I wrote this two whole days ago in anticipation, so voila! Another post on time! The next one will come in the new year, so in the meantime, let's have some Anton desperately trying to survive. 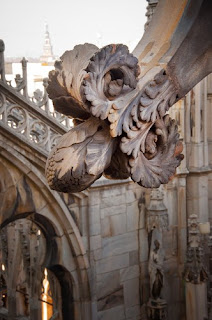 Anton had never had so much reason to be thankful for extravagant gothic architecture in his entire bloody life. The university had existed in Zurich since the early fifteenth century, and while most of the original buildings had been redone, the tower had stayed in the original style. Its pyramidal spire was ornamented with projecting marble leaves and curling flowers, a departure from the usual religious symbolism, but not one that Anton had ever given much thought to. It was safe to say that he was thinking of nothing else right now.

Just beneath his window, one of the tower’s elaborate stone ribs protruded just far enough that he happened to hit it on his way down. The pain had jolted Anton out of his magically-induced reverie, and he turned and scrambled against the stone as his descent continued. He finally managed to arrest his fall perhaps three meters below his window, hanging on to the very edge of the rib before it curved back into the body of the tower. The knob he clung to was frigid in the oncoming darkness, and the wind swirled his coat around his dangling legs like it was pulling at a kite. Anton gulped for breath, and tried to think his way through this.

You are still alive. He was, despite the odds, despite Montgomery’s unheard-of thaumaturgy and deliberate act of attempted murder, not yet dead. That was a fact, and an enormously comforting one. On the other hand, he was also bleeding at the temple from where he’d hit his head on the way down, his vision was blurry, his strength was failing, and his window was so far above him now that it felt like he would never be able to regain it.

Don’t think like that. Imagining defeat was almost as perilous as actual defeat, and in this instance, defeat meant certain death. He could not call out for help—no one would hear him over the wind, and no one would see him in the gloom of night. He had to save himself. One step at a time. First, he had to regain his footing.

That was easier thought than done, of course—his shoulders and arms ached from the effort of holding himself up, and his hands were almost completely numb. He clung to the farthest point of the rib, so there was nothing beneath him to fix his feet to, but perhaps if he swung his legs sideways, he might—Anton tried it, then lost his breath in a wave of fear as his hands slipped with the momentum and he nearly lost his grip.

Not that way, then. But it had to be some way and it had to be fast, or he would lose what chance he had left at saving himself. There were other decorations he could grab, and perhaps if he separated his hands he could get the leverage to push himself up onto the arch above him. It was risky, but what wasn’t?

It was a decision he needed to make, and fast. Anton stopped considering it and simply threw himself into the movement, shifting his right hand over a foot to the neighboring stone knob, catching it by the grace of god and hauling himself up high enough that his chest impacted the angled arch above him. His perch was still precarious, but once he got a knee up and over the edge to stabilize himself and rearranged his hands, he could breathe a bit easier.

Anton curled his entire body against the arch and looked up at his window. It was the only ingress close enough to make use of, and while it being closed wasn’t exactly auspicious, he was certain he could break it if he had to. He got his feet under him, blew on his hands to put some feeling back into them while carefully avoiding touching the blood—if his fingers became slippery he’d never get out of this mess—and began to climb.

It was so easy for the first few meters than Anton almost—not quite, but almost—mustered the energy to smile. He’d get out of this, he’d find Camille, and the two of them would—

Oh hell. Oh hell, wait, he’d gone and lost the palimpsest. He’d given it to that traitor, given it to him without even attempting to hold back, how could he have done such a thing? How would he explain that to Camille? Anton’s brief burst of good humor drained away, and as he approached the last meter just beneath his window, he found no reason to resurrect it.

He would have to let go of the arch completely to get his hands on the ledge. He could leave his feet on, but it would be an awkward position, and if his grip slipped he would be left leaning backward over space with little recourse left for saving himself. Anton gritted his teeth and breathed in pure determination. He would make it. He had no choice—he had a great fault to remedy, and little time to do it in. Hell, Montgomery might be talking with them right now, making his excuses, executing his escape…

Anton leapt. His hands caught the ledge with a painful slap, and he managed to keep his footing, if just barely. He pushed his hand forward, reaching for the bottom edge of the window, and—

His fingers slipped sideways, like they were sliding on butter. He fumbled but regained his equilibrium and tried again. Same result. No matter how hard he tried, his window stubbornly resisted his touch. Another spell. A spell of avoidance, perhaps, but why bother when Montgomery couldn’t have known that Anton would catch himself?

Perhaps he was drawing attention away from what had been the hiding spot of the palimpsest. Anton had kept it there for a good while, and magic tended to shed a bit when left in one place. There would be a signature in the glass, one that might be used to infer Montgomery’s objective, if someone was clever enough to detect it and put the pieces together. Camille was certainly smart enough, but he didn’t have the magic. Perhaps he would—

Anton’s hand slipped again, and he felt his heart leap into his throat. His body was desperate now, and his mind wasn’t much better. This window was his only chance if he didn’t want to try and cling to the arch for the rest of the night and into the morning, until someone noticed him. He didn’t have his chalk, he didn’t have his wand, he couldn’t do his magic. He wasn’t like Montgomery, able to work miracles of thaumaturgy on the fly. He was—fuck, he was—

Both his hands slipped this time, the spell pushing back against what it perceived as an intruder, and Anton couldn’t stop them. He barely registered the sudden light illuminating the window, or heard the click as the latch was opened. He could only hear his own voice, harsh but faint, and the moan that emerged from his throat as he slid backward toward his doom. The wind was harsh now, cold and cruel, and this was it, he was about to die, he had fought to survive for nothing—

A hand so warm it felt blistering on his frozen skin closed around his right wrist just as Anton began to fall. Strong arms lifted him up and over, back into his laboratory, until his curled, shaking body finally came to rest against a decidedly familiar and entirely welcome one.

“Anton, good God.” Camille’s long fingers brushed tentatively at his head, searching for the source of the sluggish blood. “What happened to you? Never mind,” he added a moment later as fatigue and shame clogged the words in Anton’s throat. “I’m just grateful I found you in time. Grateful that you’re alive.”

Well. That made two of them, although Camille undoubtedly wouldn’t be so grateful once he knew how Anton had failed. Anton shut his eyes and let his lover hold him as the worst of the pain seeped out of his body. He would have to own his failures soon enough. There was no harm in accepting a bit of comfort before it was lost to him entirely.
Posted by Cari Z at 7:25 AM