Notes: The battle has begun! Have some starships duking it out for a while. Tactics, treachery and a whole lot of Darrel doing his best to follow along. 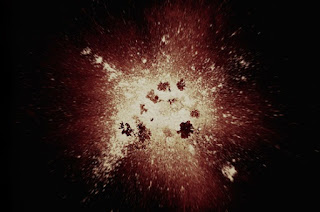 They weren’t caught off guard. That was the best that could be said of the Federation Fleet’s initial foray into battle. They knew what they were flying into, and that was the only reason that the descent from liminal space didn’t result in a bloodbath. That, and modified shields that gave the Federation ships a better chance against energy weapons that tore through their outer resonances like they were cobweb.

Darrel sat frozen in his seat behind Cadet Reyes, watching the numbers fade in and out on her tactical screen and listening to General Caractacus respond to his crew’s information with calm, detached orders. “The Pisces is heeling, sir, portside shields look to be completely down!”

“The rest of Pisces’ detachment will bring up cover for her. Keep our firepower on the ship in front of us.” He sounded so certain, but Darrel knew there was no certainty in the heart of battle. It was clear now which commanders had been slow to respond to the general’s staffing and defensive orders—they were taking heavier damage, and were slower to respond to threats. Their fleet was outnumbered initially, twenty-nine ships to eighteen, but they weren’t entirely outgunned. The pirates in front of them—and Darrel had never even heard of pirates who had access to a military-level Destroyer, it was a fucking farce—were being surprisingly chary with their ammunition, and their delays gave the biggest Federation ships time to maneuver themselves into the line of fire.

“Target the next closest of a similar size within the same zone. On my mark, turn broadside guns on it and focus our forward firepower on the ship harassing the Cleaver.”

“Sir,” one of the tac officers called out worriedly, “if we change our heading like that, we open ourselves up to enemy fire against the dorsal shields. They’re down to fifty-one percent.”

“If we lose the Cleaver, we open up the smaller ships she’s protecting to firepower they can’t expect to handle. We’ll manage, Cadet. In three, two…mark.”

The Triumph was a Super-Destroyer, a new class of ship that was bigger and more powerful than anything the Federation had put out in decades. There hadn’t been much of a need, without open warfare dogging them, but the admiralty had wanted a new toy. The Triumph was half again larger than a regular Destroyer, had more flexible defensive capabilities and a weapons system that was more than a match for anything they were facing. That was good, since it was the only ship in the fleet that was doing consistent damage to the enemy ships. The Triumph’s starboard battery opened fire on the harrier-class that was firing on them, hitting it with a flurry of destructive power so vast it had no choice but to run. It tried, but it didn’t make it far. “Enemy ship destroyed, sir!”

“Two on our tail, sinking under to fire on our belly!”

“Aye, sir.” The ship began a vertical roll, its stern dropping as the bow remained fixed on the ship it was engaging there. The forward guns weren’t as powerful as the side batteries, but between their firepower and the Cleaver’s defensive shots, the enemy ship had to turn tail and run.

Three, two, one… Darrel counted down in his head, gritting his teeth, but when the shots hit it wasn’t nearly as stunning as some of the earlier hits had been.

“Twenty-four enemy ships remain. We have all eighteen, although—” The tac officer cut off for a moment. When he spoke up again, he sounded worried. “Pisces is in bad shape, sir. Captain Himmel has ordered an evacuation. Their shields are next to nothing, and there are two ships converging on it.”

“Force a connection, and get us to Pisces, now. Inform Captain Gorion that the Cleaver will have to stand in front for the moment.”

“Aye, sir!” People got to work, and Darrel’s hands itched with the urge to be doing something, anything, other than watching. On the other hand, seeing how hard Reyes was working just to get the Triumph going in the right direction, much less responding to commands from the tactical staff, and he had to admit that he was probably doing more good by not doing anything at all.

“Connection holding, sir! We have the Hammerfall on the conn.”

“Captain Uris.” Darrel shivered at the dark tone of the general’s voice. He’d first met the man as Cody’s grandfather, a kind, patient man. He’d gotten to know him better as a commanding officer, hard but fair. This tone, though? There was nothing kind or fair about it—he sounded coldly furious. “Why aren’t you covering your detachment?”

“I’m currently engaged with two separate warships, General,” Captain Uris snapped. “Forgive me if I don’t have time to pander to your urge to backseat command.”

“Your destroyer should have been at the front of your detachment, not cowering behind a Class-Five Skyblazer. You’ve been engaged with those two ships for half an hour. They’re a third your size. Why aren’t they destroyed?”

“Not all of us have your firepower, sir. My shields are at forty percent and dropping, I don’t have time to—”

“Captain Obede.” The general cut off the detachment commander, talking directly to her subordinate. “Status, now.”

“Why are you shadowing Uris instead of assisting the Pisces?”

“Sir, I was ordered by my commanding officer to maintain a defensive position on Hammerfall’s port side.” He sounded tense.

“Ma’am, my general has asked me to report. I must comply with his direct order, the same as I did for you.”

“Open my comm to the rest of Uris’s detachment,” Miles directed his communications officer. When she nodded, he spoke with resounding authority. “Captains Obede, Kylal, and Terry, I’m reassigning you to my detachment. Disregard all former directives and protect the evacuation of the Pisces. Kylal and Terry, for the time being, follow Captain Obede’s lead.”

“Aye, sir.” A chorus of what sounded like relieved voices echoed through the comm, and Darrel could see the ships begin to move away from Hammerfall.

“You can’t steal my detachment in the middle of battle!”

“You haven’t proven to me that you deserve them,” Miles retorted. “How many enemy ships have you destroyed, Captain?”

“I’ve been faced with a situation that—”

“None. And according to my engineer’s scan, your shields are over ninety percent. If you want your protective detail back,” and oh, the general sounded positively vicious now, “then you’ll prove your mettle by putting your ship on the line for this fleet. The Hammerfall is the second most powerful ship we have. It needs to be doing the second-highest amount of damage.”

“You don’t understand anything.” Captain Uris was practically spitting into the conn. “This can only end one way, and I’m not going to drag myself and my crew through the black just so you can go down in a blaze of glory! I refuse to follow your immoral orders. We’re leaving.” And a moment later…

“Hammerfall has entered liminal space, sir.” The communications officer sounded stunned. “She’s gone.” And all the enemy ships that had been closing in on her were suddenly free to target other, less defensible vessels.

“I believe the captain went down with the ship, sir.”

A moment of solemn silence reigned before Miles spoke again. “Pursue broadside engagement against the three nearest ships. Roll us if you have to, we’re playing a game of brute force now.”
Rolling them would expose the fragile dorsal shields. But the Triumph was the only cover some of the smaller ships had, and would make itself vulnerable accordingly.

Darrel gritted his teeth and took a deep breath as the ship began to twist.
Posted by Cari Z at 12:45 PM