Where There's A Will is out!

It's here! Where There's A Will is available to all! 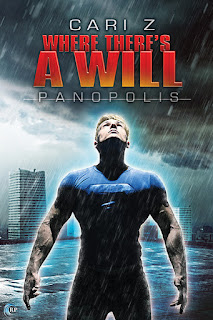 Guys, I'm so ridiculously pleased with this book. It's got Heroes, Villains, mad science, battle royales, humor, angst, love, sacrifice...all of my favorite things. I pretty much love it. And so did Publisher's Weekly, where it got a starred review! Did I mention that maybe once or twice already? *wink*

"Z’s third novel set in the beautiful but dysfunctional city of Panopolis, where superheroes and their daily affairs are a frequent threat to civilization, is sexy, emotional, and hilarious... Z keeps the action rolling at a breakneck pace, with sharp turns from bold humor to heartbreaking tragedy and self-sacrifice. The satisfying and exciting conclusion is tender and a just reward for both the hero and the reader."

If you're looking for a good place to jump into the Panopolis series, this is it. This book follows the hero Freight Train, as opposed to the villainous couple who starred in the first two, although they both get cameos. I hope you give it a try! You can find it any any of the retailers below:

There's a blog tour, with a pretty cool prize (if I do say so myself) to go with it, so follow along on Riptide's website or follow me on Twitter to see what's up.