Notes: Whoa.  The end.  For reals.  For now.  I always leave things like this open, but I think we can safely say goodbye to our boys for now.  The next serial is starting up soon, and it’s going to be a decidedly new venture for me.  I’ll tell you more about it later.  Enjoy, darlins!


“Cody, you have some of these same toys back at home,” his daddy pointed out.  “I’ve seen at least five of these Space Rangers before.”


“But I didn’t have their flyers before,” Cody pointed out.  “Daddy, they hover!  I have to get them home too.”


“We’re coming back in less than a year,” he said, and he was using his ‘this is my last word’ voice, so Cody knew not to push it.  “Pare it down, bucko.”  He picked up one of Cody’s bags and hoisted it a little.  “This one done?”


Cody looked at it, wondering if he could possibly fit anything else into it.  Probably not; the seams were bulging.  “Yeah, it’s done,” he said reluctantly.


“I’m gonna take it out to the ship then.  We’re taking off in fifteen minutes, so hustle, okay?”  He walked out the door and Cody looked back down at the half-filled bag in front of him.  There was no way he could get everything he needed into it.  The helmet that Wyl got special for him was too big, and the geofinder from Robbie wasn’t going to work on Pandora, they didn’t have the right satellites for it.  The book of fairytales from Miles was too nice to just shove into a bag; it was old, it was actually real paper.  He’d already packed the stuffed tiger from Claudia, but without the stuffed lion that came with it, it might get lonely…but he just didn’t have room.  He huffed and leaned against his bed, rubbing at his hot, stinging eyes.


“Nothing,” Cody said fast, turning around so he wasn’t facing the door.  But Garrett came over anyway, touched his shoulder as he sat down next to him.


“And I know we’re coming back,” Cody went on, because he did, everyone kept saying it, “but not for a long time.”  Because a year was a very long time, no matter what Daddy said. “And…”  His throat was feeling hot now too, scratchy and full, and he stopped talking.


“And you’ll miss it,” Garrett said.  Cody nodded, eyes still on the floor.  “I understand.  It’s hard to leave things behind, even when you know it’s not forever.”


“It feels like forever,” Cody whispered.  “And I already miss them.”


“Yeah, that’s what I thought we were talking about.”  Garrett tugged him a little closer and Cody went, burying his face in Garrett’s side.  “You’ve never really left anyone behind before, have you?”


“Just Grandma, and I don’t really missed her,” Cody confessed.  “And before, when you left, it was you going away, not me.  I did miss you, though.”


“And I came back in the end,” Garrett said, rubbing a hand over Cody’s shoulders.  “And so will you.  No one’s going to forget you, and you won’t forget them either.  You’ve got the holos of everyone?”


“Yeah.”  Cody and Garrett had spent most of yesterday running around and getting videos of everything and everyone he liked here.  He even got a short clip of Thérèse and Garrett arguing, which was just like normal.


“Then you’ll have plenty of things to help you remember everyone, and you can show them to your friends back home.  You do want to see Lacey and Tamara again, right?”


“It would be nice, but…there’s something to be said for the healing power of absentia,” Garrett said.


“What’s that?”
He could tell Garrett was smiling from the way his voice changed.  “I’ll tell you later.  First, we have to finish packing.”  He took his hand away and Cody straightened up, then looked at his bag.


“I guess I should put some clothes in too, huh?”


Garrett blinked once, then laughed.  “You haven’t packed any of your clothes yet?”


“I needed the room for other stuff!”


“Yeah, I know.  C’mon.  Clothes.”  They went through Cody’s wardrobe and packed his favorites up, and some dumb stuff that Cody was sure he wouldn’t need but Garrett grabbed anyway, like socks.  He looked over all the other things he was going to have the leave here, and sighed morosely.


“Cody!  We’ve gotta go!  Is Garrett—” Daddy came into the room and looked at the two of them, then smiled.  “ I shoulda figured.  Are you guys done?”


“We’re done,” Garrett told him.  The met in the middle of the room and kissed, and Cody rolled his eyes.  They had been doing that more and more since they got back from their honeymoon.  It was kind of nice, but kind of gross too.


“Mmmyeah,” his dad said, pulling slowly back from the kiss.  He looked a little dazed.  Cody nudged his hip to get him moving.  “Yeah, we have to go.”


“Come on, then.”  He hoisted his bag over his shoulder and led the way out of the room.


Everyone was waiting for them on the landing pad.  Well, everyone except for Jack; Cody had said goodbye to him yesterday, with the lawyers and his dads present.  It was kind of weird, but he guessed he’d have to get used to it.


Cody passed his bag to Daddy and made sure to give everyone a hug.  His throat was tight again and he couldn’t say anything, but at least he able to keep from crying.  He kissed Baby Renee on the cheek, and he managed to nod when Wyl whispered that next time maybe he could try driving the tank instead of just riding in it (Robbie smacked the back of his head and made Wyl grin).  By the time his dads got through with their goodbyes and they were all on the ship, Cody felt exhausted.  He let his daddy strap him into his seat and shut his eyes as they were cleared to take off.


Garrett strapped in next to Cody instead of in the copilot’s seat.  He didn’t say anything, but he took Cody’s hand and held it all the way through the take-off and until they were cleared to move around again.  Daddy set the autopilot, and then they all stood together at the viewport and watched Paradise get smaller and smaller.


“Are you okay, bucko?” his daddy asked.


Cody took a shuddery breath.  “Yeah.”  He grabbed both of his dads hands and pulled them in closer, so they kind of surrounded him.  It was sad to say goodbye, but at least he still had the most important people with him.  And they were staying.  “I’m okay.” 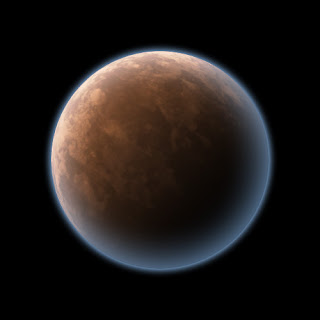 picture belongs to http://gallery.artofgregmartin.com/tuts_arts/making_a_planet.html
Posted by Cari Z at 12:03 PM