Hey, darlins! I promised you something to read this week, so have a quick excerpt of Dauntless, the sequel to Luckless :) A short and largely unedited scene, but still fun. 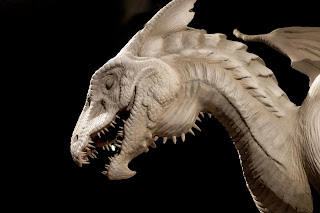 They left from the outer wall of Forge instead of the stadium. Ladon was enormous, even for a dragon, and when he changed in the stadium it tended to send the youngest dragons scurrying for the safety of their mother’s bulk. On the wall, though, there was no fear. The people who guarded it knew them—many of them knew Evan from before he and Ladon had bonded, and the years had made them friendlier.

“He went northwest!” Oliver shouted after them from his perch on the tall concrete turret, where he manned one of Forge’s two working machine guns. “Toward Long’s!”

Evan nodded his thanks as Ladon began to bank, raising great clouds of dust with his wingbeats as he turned them in the direction of Long’s Peak. It was one of the tallest mountains on the Front Range, a flat-topped icon and guidepost for travelers. It was also one of the stupidest places for a man and a dragon to think about trying to take shelter, a place with no shelter from the elements, no significant sources of game, and plenty of spaces for a patient monster to hide. Evan hoped for his sake that Wayde was easy to find, but if he found that pair of idiots on top of Long’s Peak he’d be hard pressed not to shout both of them deaf.

Ladon sent a thread of amusement through the bond to Evan, keeping his bright eyes trained below them for any sign of the missing rider and his dragon. Evan watched too, relieved that the worst of the dust had finally settled. Visibility was still poor, though—the sun had just begun to set behind the mountains, and as the shadow of the Rockies spread out across the plains, Evan resigned himself to settling in and waiting to be useful.

Evan chuckled. You’re the only one who thinks so.

Humanity sets too much importance on utilitarianism. Even in this difficult time, there should be a place for existence without justification, without having to meet arbitrary standards of necessity.

I wish it were that way.

Ladon was quiet for a moment before thinking So do I. Perhaps Jason would experience fewer difficulties then.

Oh, Jason. The reminder of what he’d gone through today was enough to quiet Evan’s mirth, and they kept flying in silence, tension growing minute by minute as they still failed to find Wayde and Feron.

Fucking Wayde, who’d flown off in a huff without the barest supplies—no signal flares, a bow but no more than three arrows ready to fire, none of the cold-weather clothes he’d want if he got stuck out here overnight. Evan was going to give this guy a piece of his fucking mind when he—

Ladon extended his head in the direction of the slopes a dozen or so miles south of Long’s where, sure enough, a flame was spreading. Spreading fast. Had Feron set the entire hillside ablaze? Dragons were taught to control their flame better than that from the time they were hatchlings.

Ladon banked down, and in the light of the fire Jason could see hulking black shapes darting back and forth along the edge of the flames, which spread out in a broken ring from a central spire of rock. Feron was perched on that rock, flapping his wings hard to fan the burn even as he breathed more fire. Crouched just below him was Wayde, holding his bow but—as expected—out of arrows.

Wayde looked like he was yelling something at Feron—maybe telling him to fly away, judging from the way he threw his arm toward the sky. The dragon didn’t seem wounded, so the likeliest reason he hadn’t taken off yet was because he was too tired to carry both himself and his rider somewhere safe. Because he was only twenty, and would likely double in size over the next ten years if he didn’t get killed off through sheer stupidity before then.

There’s too much fire already to add more, Evan thought at Ladon as he squinted down at the black shapes. Dog-like, but far bigger than any dog, yet with curved spines and hulking shoulders more like what you’d see on a hyena than a wolf…it was a pack of ringdocus. They were menaces in the foothills, fast and vicious pack hunters that were far cleverer than crix. The only good thing about ringdocus was that their packs didn’t get as large as crix—too much competition, too much of a need for meat. They reached a certain size, then began fighting amongst and cannibalizing themselves to sort out the hierarchy of needs.

Do you want to shoot them from the air or the ground?

A few passes from the air, Evan decided, already freeing his bow and nocking an arrow. Then we try to go in and grab Wayde.