The Tank: Chapter Five, Part One

Notes: Back to The Tank! Have some introductions, enjoy the wine, prepare for chaos! 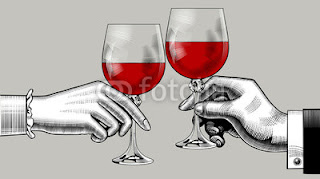 It was just as well that Anton had packed when he did, because before the sun set he, Grable, the three principle representatives of the emperor and their entourage were on their way to Paris via a private train car. Not an entirely private train, thankfully—Anton didn’t think he could have taken that. The private car was stressful enough, for a variety of reasons.

The men sent by the Emperor to coerce—er, persuade—them to Paris were a disparate lot. One of them was a clergyman, a cardinal in fact, his blood-red robes making him stand out like his avian namesake among the dark, crowlike garb the rest of them wore. He was an older man, with a severe face but a surprisingly approachable demeanor. Anton, who was disinclined toward religion on moral grounds, nevertheless found His Eminence Cardinal Proulx to be a thoughtful, pleasant person who was more curious about his thaumaturgy than condemning. The relationship between God and magic played out in fraught ways at times, both politically and philosophically, but the cardinal was nothing but polite. Anton intended to corner him for a discussion of the church’s position on supporting the empire’s violence against its own indigenous populations when they had a moment.

The thaumaturge that accompanied the party wasn’t much of a conversationalist, to be honest. Monsieur Deschamps appeared to be a ritualist type—“Lit up like a cathedral at Christmas, he’s got so many magical devices on him,” Dr. Grable had remarked—and while that was interesting to Anton, the man didn’t seem very inclined to discuss the craft.

“I prefer not to speak about them,” was all Deschamps said when Anton tried to bring his devices up in conversation once they were settled in their car. “As long as I’m the only one who knows what they are, no one will be able to counter them all.”

Anton had chuckled. “Are you worried about an assassination attempt, then?” he asked.

Deschamps had scowled in return. “You have no idea what I’ve been through,” he declared, gripping the silver triquetra pendant dangling around his neck so hard his knuckles turned white. “I won’t have my protections dismissed by someone who’s never put his life on the line for the greater good before! Good day, sir!” He had retreated, leaving Anton completely nonplussed. Whatever had happened to the man, it had left him rather on edge.

The final imperial representative was a vicomte, because of course he was. There was no escaping the grasp of the aristocracy when the emperor himself had sent the delegation. Vicomte Wilhelm Piotr Swartzman Voclain had an estate outside Strasbourg, hence a very strong motive to keep the empire whole—Strasbourg was technically still in the “heart” of the French Empire, but it would be one of the first to chip away in real unrest, a way for dissenters to strike at Napoleon’s most powerful allies.

Vicomte Voclain was charming, personable, and about as genuine as a fish sporting fur. He was handsome, a bit taller than Anton and broad through the shoulders and chest, very fit, and also very industrious when it came to picking and choosing his company. He had taken one look at Anton and immediately deduced that they had nothing to talk about, and apart from a brief and genteel greeting hadn’t looked his way since. He seemed wary of Dr. Grable, for all that he had been sent to Zurich to persuade the man to his cause, and he was very clearly uninterested in moralizing with the cardinal or putting up with Deschamps’ fluttering nerves. So he’d found another person to keep him company.

“That is too clever!” Caroline exclaimed from the other side of the car, a glass of wine in one hand, the other resting on the vicomte’s arm. Anton glanced her way and grimaced. Her prediction that she could find a way to finagle herself down to the capitol had come true. She had undoubtedly taken one look at Voclain, determined him to be her ideal target, and persuaded him into doing exactly what she wanted in less than an hour.

Her retinue had been dismissed to another car, with the exception of an older woman who was her “travel companion,” sitting back and knitting quietly. The presence of the other lady was meant to encourage chasteness between the married Caroline and the decidedly rakish Voclain, but her presence didn’t seem to be deterring the vicomte a whit.

Voclain smiled a vast white smile. “You would have thought it twice as clever if you could have seen it for yourself, my lady.”

“I have no doubt of that at all. It’s so rare to find a gentlemen such as yourself paying such close attention to the comings and goings of his own estate, sir.”

“I’ve never understood the English need to reduce all important labor to the realm of servants,” Voclain declared. “If I am to be the lord of my manor, then I must know every aspect of its workings. How else will I know if I am squeezing enough blood from my stones, no?”

This sort of entitled prig is exactly why the empire is careening toward an uprising, Anton thought uncharitably to himself. If he’d been alone with Caroline, it was the sort of observation he’d have enjoyed sharing with her, but she’d clearly been very careful not to give away their connection. He appreciated that. Having given her a “no,” she was handling it gracefully. He only hoped she wouldn’t get too ambitious with her spy-gathering.

What a joke. That woman only knows how to be ambitious. In that case, he wished her much joy of it, because he wouldn’t be assisting her.

The only bright spot in the entire process so far, apart from having an assured income for a time, was the glimpse Anton had gotten of a man getting onto the public part of the train when he’d boarded earlier—a man who looked, at least from behind, very much like Camille. Was he returning to Paris already? Was he doing it because he wanted to be close to Anton, or because he had already been summoned home by his masters? Or did he have another destination in mind, one that would have him leaving the train well before the three-day journey to Paris was over?

Anton didn’t know, but if he had to be satisfied with so little of Camille, after he had just had so, so much of him, he would do his best.
Posted by Cari Z at 12:24 PM