The Tank: Chapter One, Part Two

Notes: Moving on, let's meet a new/old friend! The next chapter will delve more deeply into the socio-political situation of the French Empire, so enjoy a bit more light before we get dark again. 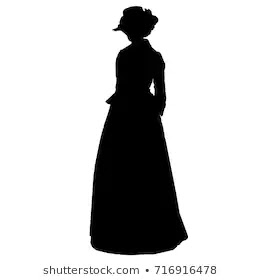 It took a moment for Anton to muster his ability to speak, his surprise was so strong. “Caroline!” He moved toward her without thinking, his body overcome by instinct. She stepped toward him at the same time, and a moment later they were wrapped in each other’s arms.

She looked beautiful, like she always had. A bit older, perhaps, but the time had only served to enhance her allure. Her dark blonde hair peeked out from beneath the brim of her very broad, ornately decorated hat, and her figure was as sleek as ever, despite giving birth to a baby boy only eight months ago. Perhaps the corset has something to do with that. Anton didn’t know, and he didn’t care. In a world of change, a world of ever-increasing political fear and uncertainty, he was so grateful to be with someone whom he could rely on again. He knew Caroline, knew her like he knew himself, and loved her far more than that.

“Anton,” she murmured. “Darling, I can’t tell you how wonderful it is to see you again, at last. Two years.” She pulled back and pressed her hands to his face. “Two years! How is it even possible? We haven’t been apart for so long in our entire lives! And in your last letter you didn’t even hint that you were coming back, and that’s just—Anton, I thought you never meant to stay away permanently! London is your home!”

The words hit him like a rain, drenching him in care. It didn’t matter that they weren’t entirely positive—Anton basked in knowing that he was with someone who loved him enough to chide him again. “London will always be special to me, you know that,” he said. “But I can’t live on air, and I can’t support my mother with it either. London is not interested in hiring me for what I am worth.”

Caroline disengaged one of her hands to wipe discreetly her eyes. “No one could pay you what you’re worth, darling, but surely someone there must be able to tempt you to return. Heavens, I would pay you to come and work in my lab if it was possible.” Caroline was spearheading a massive research initiative for the University of Edinburgh—a compendium of arcane ingredients and their various uses across the entire body of work that would utterly revolutionize spell symbology for thaumaturges. The key to her funding, however, was that she employ only those thaumaturges who could get approval from the Board of Masters. Anton was not one of those practitioners, and likely never would be.

Anton shook his head. “It’s all right, truly. I may yet return someday, but for now I’m contemplating several different options here on the continent.”

“Anton…” Caroline looked at him closely. “It isn’t like you to dissemble. When you say ‘options’ do you mean that you have offers in hand, or that you’re going to hunt about for an employer the same way you hunted for a school that would accept you?”

Anton pulled back, stung. “Forgive me for not being born into a class that allowed me to step into any university I wanted and get a position there.” That wasn’t fair—Caroline had fought, and was still fighting, against significant and ingrained social bias against the fairer sex. That she had her own laboratory, her own staff and a project of such magnitude, was a testament to her incredible skill.

“I—” Even as he opened his mouth to apologize, Caroline was already waving it off.

“No, that was my fault, I knew better than to simplify things in such a silly way. Of course you did everything you could to stay, I know that.” She sighed. “It’s just frustrating, not having you nearby. You’re one of the best people in my life, and I hate that you’re so far out of reach.”

Her words both touched and saddened him. “But you’ve got your work, and your husband,” he reminded her. “Not to mention your little Sean. How is he these days?”

Caroline beamed. “He is delightful, thank you. Quite a handful, and probably giving his grandmother fits right now, but I couldn’t be happier with him. It’s a relief to have provided an heir as well, honestly, for both Daniel and myself. He is free to spend his time hunting and riding, and I am free to focus on my work.”

“And that makes you…happy?” Anton ventured. It wasn’t really his place to say anything, but the fact that Caroline was settling for “relieved” with reference to her husband spending little to no time with her or their son was upsetting to him.

“It’s my preference,” she said calmly. “Daniel and I are a better match on paper than we are in person. He is a good man in many respects, and he offers me a degree of independence that many husbands would balk at, so I’ve nothing to complain about there. But we have little in common on an intellectual level. It’s better for both of us that we allow each other our own occupations without reservation.” She tilted her head a bit as she looked at him. “And you? Have you found a good match for yourself?”

Caroline knew Anton’s predilections, and it was only for the sake of their habitual discretion that she refrained from being more blunt. Anton was a bit surprised at himself—had he really kept Camille a secret from his dearest friend for two years now? Not in every respect, but he certainly hadn’t divulged their more intimate connection. “No one to marry, I’m afraid,” he said at last.

“Hmm.” Caroline looped her arm through his, passed him his jacket from where he’d abandoned it earlier, and turned them both toward the door. “I think you should allow me to take you out for a meal, as a graduation gift, and speak to me about someone you would not marry for a while. It might do you some good to share.”

Anton smiled and tipped his top hat onto his head. “I think that sounds perfect.”
Posted by Cari Z at 11:25 AM