Notes: Did I say one more chapter? I meant at least one more. This one isn't exactly a sweet, light-hearted reunion, but that's coming, I swear! In the meantime, have some Garrett and Jonah. Some ACTUAL Jonah. 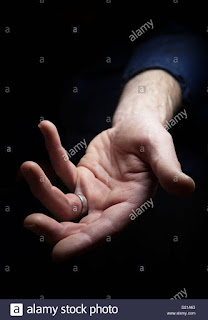 Jonah let the text pass across the visual input from his implant and vanish, trying to ignore the way the words ratcheted up the tension crawling across his shoulders and tightening his chest. There was no need for him to be nervous. This was his husband, for cryin’ out loud. This was the person he’d been trying to reach out to for over a month, the man who’d featured in every one of Jonah’s daydreams, sustained him with his memory. He wanted him here, right now, yesterday, before any of this had ever happened. So why was he so…not nervous…concerned?

The texts didn’t help. They’d been cleared for enough bandwidth to send video messages for the past two days of Garrett’s travel, but his husband stubbornly clung to words only, no visuals. Jonah wondered what that said about his husband’s state of mind, and tried not to let fear get the better of him. Garrett didn’t blame him for getting shot down, of course he didn’t. There was no way he could have known that Pandora was going to be invaded then and there, and Lacey had come through okay, so there was no reason to hold a grudge. Not that he would, it wasn’t Garrett’s style, but…

But maybe he resented the fact that their son had spurned every safety Garrett had offered in favor of flying to the Fringe in a Drifter deathtrap with people who’d as soon sell him for parts as take care of him, all to find Jonah. Maybe he was too busy dealing with the fallout from the state of near-anarchy in the Federation senate to give Jonah more than the cursory attention he was getting. Or maybe…

Maybe the thing that was wrong here was Garrett, and he didn’t want Jonah to know. It wouldn’t be the first time he’d neglected his health when something caught his attention. Usually Jonah was there to badger him into taking better care of himself, or Miles, or Claudia. But this time around there had been no one, and it had been more than three standard months since Jonah had physically been in his husband’s presence. A lot could happen in that amount of time.

Jonah determinedly relaxed his clenched fists and made himself take a deep inhale, then exhale slowly, loosening some of the pain in his chest. It would be fine. He knew things were gonna take a while to get back to normal, and for a first meeting—well, there was a reason he’d asked Cody and Ten to stay behind. If they were gonna fight, the kids didn’t need to see that. If they were gonna cry—and Jonah couldn’t speak for Garrett, but it seemed like his tear ducts had been on a hair trigger all morning and jut seeing his husband’s bright hair would be enough to set him off—then they didn’t need to see that either. It wasn’t shameful, but it was personal.

Jonah squinted up into the surprisingly-sunny sky, looking for the familiar outline of his husband’s ship. There—coming in slow, the sleek lines beautifully illuminated by the daylight. Jonah shivered, anticipation and desire warring with his nervousness now in a way that made his muscles try to jump straight out of his skin. There he was. Just another minute and Jonah would have Garrett in his arms again.

The ship set down smoothly on the landing pad, hydraulics settling with what sounded like satisfied hisses. The outer hatch opened and the walkway extended, and Jonah held his breath. Any second now…any second…

Can you come aboard?

What. The. Hell? Why was he being asked to board when there was a whole planet waiting beneath their feet? Jonah felt a cold wave of fresh anxiety sweep over him. Sure, darlin’.

With steps that trembled despite his best efforts, Jonah headed up the ramp and toward the cockpit. Garrett was there, but he was sitting down at the small table that unfolded from the wall behind the captain’s chair, the ship’s portable medkit open next to his left arm.

He looked…ghostly, was the best word Jonah could come up with off the top of his head. So pale he was wan, too thin for the cobalt blue suit he was wearing. Still gorgeous, still the best thing Jonah had seen since Cody almost crash-landed here weeks ago, but not well.

“Darlin’?” he asked, careful not to press too far into the cockpit. He didn’t want Garrett to feel crowded. “What’s goin’ on?”

Instead of answering him directly, Garrett looked to the side and said, “So, you see that too?”

Jonah felt his hands clench again. Shit. He was having hallucinations. He needed the med unit—hell, at this point he probably could use an hour or so in a Regen tank, to help regain some of the muscle mass he’d lost—but Jonah couldn’t just up and demand it. Especially not if Garrett wasn’t sure he was real. “It’s me,” he said softly. “It’s Jonah, I’m here. Really here.”

“Of course that’s exactly what he’d say if he were like you,” Garrett said miserably to the wall. Or, no—he was definitely focused on something. Someone. Whatever vision he was having. “What if he isn’t?” He glanced back at the medkit, it’s glove port already open. All Garrett had to do was stick his hand inside and it would pop out an assessment and deliver an initial, stablilizing dose of Regen.

Jonah fought off the urge to take his husband’s hand and stick it in there himself. He hadn’t seen Garrett in the grips of his illness often—usually his husband was meticulous about maintaining his Regen levels. But if he hadn’t been taking meds, he’d probably gone off them for a reason. Jonah couldn’t force him to use the kit, any more than he could force his son never to do anything that might endanger his fragile, natural health. As long as Garrett wasn’t hurting himself…then Jonah was gonna to talk him into it, slow and gentle. “Sweetheart,” he said. “C’mon, let’s get you fixed up, yeah? Then you’ll know I am who you think I am.”

“Who do you think I think you are?”

Jonah was almost surprised to be directly addressed, but grateful for the opportunity. “You think I’m a hallucination of Jonah. But I’m really here, darlin’. You made it to Pandora and I’m here, I’m fine. Cody is back home waiting for us, him and Ten, and Miles is in the command center. They all want to see you.”

Good God, did he want to reach out and grab his husband and just hold him in his arms until they both stopped shaking. Jonah forced the words out through his suddenly-sticky throat. “Because we all love you. So much. We want you with us, not here on board. Come with me, Garrett. Come on outside, get some fresh air.”

Jonah shook his head. “I won’t go away.”

“One of you will, eventually.” His eyes teared up. “I don’t want either of you to leave.”

“Nobody wants to leave you either,” Jonah pressed. “And I won’t, I promise. I’m here, and I’m not gonna let go of you.”

Garrett looked away from him, back at the nothing to his left, and cocked his head like he was listening to someone else. “Are you sure?” he asked after a minute. His hand trembled above the medkit. “Are you really sure?” There was a long silence, and then Garrett closed his eyes and leaned forward, almost like he was leaning into a touch. A moment later, he lowered his hand into the medkit glove, which beeped alarmingly and flashed a whole bunch of lights before finally returning to a steady green. Jonah held his breath.

Garrett opened his eyes again, and they fixed steadily on Jonah. “You’re…really here. This is real.”

Jonah nodded. “Yeah, darlin’.” He was crying now, there was no way around it, and in the end he didn’t have to go to Garrett—his husband came to him, wrapped him up in an embrace so tight Jonah’s ribs clenched against the pressure, but he didn’t care, just held Garrett back twice as hard.