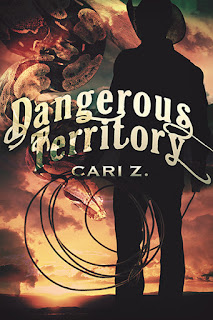 You can find it on Amazon here: Dangerous Territory
It's on the publisher's website here: LT3
And on All Romance ebooks here: ARe

This is one of the first stories I've managed to bring back to life after it's initial publication. When I saw Less Than Three Press' call for western stories for a collection last year, I thought this was a perfect fit, and I'd just gotten rights back to it. It's re-edited, re-covered and ready to go, and I'm really pleased with it. If you're in the mood for a romance (there is one, I swear, I know I'm ambiguous about that sometimes but it's there) with plenty of action, a very different sort of setting and a shifter you've probably not read about in other books (ie not a wolf/bear/tiger/lion/otter/platypus) then this could be the story for you.

With his father barely in the ground and his sister married to a scheming bastard, Carter is on the verge of losing the family ranch. His only chance at holding onto his inheritance is to get his cattle to market before his brother-in-law. That means braving Mason Canyon, which on top of being snake-infested and easily flooded, is also shifter territory. Most clans would just as soon shoot humans as look at them.His only hope of making it is to trust the shifter who's agreed to help him, and pray that Rani won’t double-cross him. If Carter doesn't go he loses everything, and if he doesn't make it there his family is as good as dead.

Happy Wednesday, folks!
Posted by Cari Z at 8:35 AM